The biography of Keith Taft begins with physics. Taft was very good at solving complex problems and earned his undergraduate degree in physics as well as music. In fact, he even taught physics for three years as well as music for five. Eventually, he went on to get his masters degree in physics before getting into his major career working with electronics and computers, which eventually made him famous in the blackjack community. 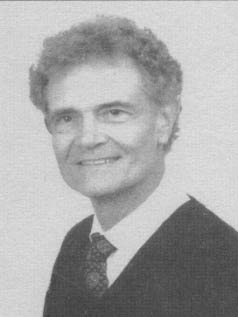 One of the things Keith was famous for was creating computer software and electronics to beat the house. He got a job in Mountain View California working for Raytheon, which deals with computer processors and micro-computers. His son Marty also helped out with building these computers and may even be credited with the invention of computer networking and was one of the first people to take digital video with a computer. Keith also spent over 30 years developing these devices in an effort to beat the house.

His history getting into blackjack

It all started back in 1969 when Taft was on vacation in Reno, Nevada and wanted to drive by Harrah's Auto Museum. While he was there, someone gave him a few coupons which could be used to play in casinos. He was thinking about blackjack so he was reading up a little bit about the game so he could play it. Once he got to the casino, he started playing and won a blackjack along with a profit of $3.50. This was enough to get him hooked later on.

So Keith Taft went back to Mountain View and started to read up and do some detailed research on the game. Particularly, he read a book called "Beat the Dealer" by Edward Thorp and found out that the game could be beaten with card counting techniques. Being the physicist and problem solver that he was, he really studied up and was a natural when it came to numbers.

So he started going back to the casino and played blackjack again for awhile with his supportive wife Dorothy. He realized that he was having limited success with his strategy and was soon loosing a bit too much money, which was trying the patience of his wife. Finally, he decided it was time to make a computer in order to become more efficient at the game.

Keith Taft continued to work on his computer for about 2 years, which was finally accomplished in 1972. This computer was named "George" and it weighed 15 pounds total. Fortunately, it was not a solid piece, but was built using pieces the size of books, which could be strapped on to various parts of his body and could be powered by batteries. Remember, this was a time when computers were very uncommon and nearly unheard of to casinos.

So he took the computer in and played blackjack again. In disappointment, he lost again to blackjack and decided to call it quits. Eventually, he came out with this story about his computer and blackjack experiences in 1975 in the San Jose Mercury News. Many people read about the story of him losing even with the hidden computer which could be operated with his toes.

Even with the failure of his amazing hidden blackjack computer, he still played blackjack. This time he studied up on card counting and had a good level of success using this strategy. Again, he went back to his original computer idea but used new technology to create smaller devices using microchips. This time he named the computer "David" and it was the size of a calculator and had a keyboard as small as a credit card, was attached to his thigh. This computer was first used in 1977. 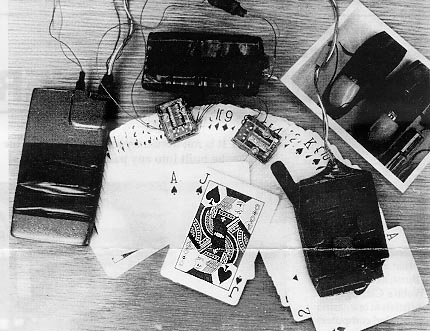 Eventually, he met up with Ken Uston, who was a legendary card counter and blackjack player. In fact, Uston talks about Taft his his book called "Million Dollar Blackjack". It turns out that Keith Taft made $40,000 in just his first week alone. Ken Uston actually had a group of 16 people where 8 of them would play and 8 would be video operators. Within 5 days, the brought in over $100,000 in profits. Eventually, Taft decided to develop more of these computers and made $10,000 for each one sold and trained people how to use them.

It wasn't until 1985 when casinos finally caught on and finally banned these hidden computer devices. In fact, it was the direct result of Keith Taft's device being found on his brother at the casino. The device was actually quite ingenious and high tech. There was a small mini video camera that was placed inside of a belt buckle (known as the belly telly and was possibly the first captured image on a computer). The camera was trying to catch the dealer's hole card and the video image would be broadcasted to a satellite dish on the top of a pickup truck parked outside of the casino. The person who was in the truck would calculate the best move and give the advice back to the player inside the casino playing blackjack. The casino let them go since the casino and FBI could not figure out how to get it to work. 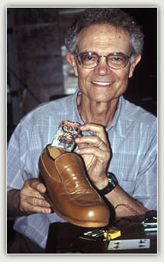 These weren't the only computers that the Tafts made. In fact, they made a computer called "Thor", which was used for shuffle tracking. Since card counting was becoming popular, casinos started shuffling the deck half-way through so players could not get the opportunity for a good count. The shuffle tracking computer was trying to track and figure out where all the cards would be after shuffling. "Naina" was another sequencing computer that Taft developed for blackjack as well.

Later on, Keith Taft moved to Elk Grove, California and was still developing computers, playing blackjack and working with electronics before passing away in 2006. Not many ordinary people know much about him but in the blackjack world, he was legendary. In fact, his status was so great in the gambling community that he was inducted in 2004 to become a member of the Blackjack Hall of Fame, which contained a league of world class players and people who made major contribution to the sport of blackjack. From his work with blackjack computers, players have taken millions of dollars from casinos all over the world.