Professor Edward Oakley Thorp is perhaps the single most important person in the history of blackjack itself. His greatest accomplishment is the discovery of card counting and the creation of the first system used to count cards. He recognized that one could get a mathematical edge over the casino because future events in a hand can be determined by the previous event if you are able to keep track of what cards are being dealt to the table. Not surprisingly, Thorp is one of the seven first inaugural members to be inducted into the Blackjack Hall of Fame. 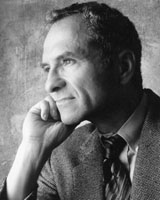 History and author of the book "Beat the Dealer"

Edward was born in 1932 in Chicago and is extremely intelligent. Besides earning a PhD and becoming a professor, he is pretty much a mathematical genius who has also written some of the most famous books in the game. In fact, his most famous published book is called "Beat the Dealer" in 1962. The contents of the book dealt with a new card counting system known as the "Ten Count System".

Ten Count was the first mathematically winning system introduced into the public. In fact, almost every modern card counting system is based off of the Ten Count System in some variations. The result of the system was normally the house would have a 5% percentage edge over the player but now the player had a 1% advantage over the casino. This 6% different was stunning and it was enough to give the player a long term profit.

His education was just as impressive. He earned a Masters degree in Physics and a PdD in Mathematics from the University of California, Los Angles in 1958. He later became a professor and taught Math at UCLA as well as MIT between 1959 and 1961. He was not part of the MIT 21 Team though because this team wasn't going to be started for another twenty years or so. Edward also taught at New Mexico State University and University of California, Irvine between 1965 and 1977. Mathematics wasn't the only field of study that he taught though. Later on in Irvine, Thorp taught a course in Quantitative Finance between 1977 and 1982. 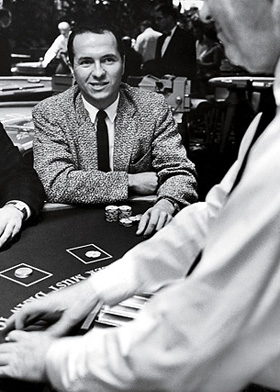 Dr. Edward O. Thorp began his gambling career while he was a professor at MIT. He would go on trips with his friend Claude Shannon and Claude's wife Betty on the weekend to Las Vegas. While in Vegas, they would usually play blackjack and some roulette as well. This was before he wrote his book "Beat the Dealer" in 1962. Not only did Thorp invent a mathematical system, he also invented a small concealable computer with Claude for advantage play that he and his wife wore while playing roulette originally. Even during this time before the golden age of blackjack teams, he still got funding from investors to play at the casinos. Thorp received $10,000 to play blackjack with in order to test his systems and theories. Everything Edward Thorp did was successful and this is when he started to invent his system for counting cards.

After his book became famous, the casinos obviously got word of it and they needed to go on the defense obviously to keep from losing money. Interestingly enough, the casinos went overboard by drastically changing the rules of the game and going overboard. Customers and players simply did not accept the rules and did not play the game at all so Vegas had to roll back the old rules again. When someone writes a book like this, word quickly gets to the casino.

Another example was when Ken Uston released all of Al Francesco's blackjack secrets exposed, previously unknown to the casinos, by writing his own book and eventually got Francesco and his team barred. Ironically, the casinos used the same method to fight back against Thorp as they did with Francesco. They tried to phase out the one deck blackjack game and use four decks in a shoe instead, which was eventually accepted by the public. 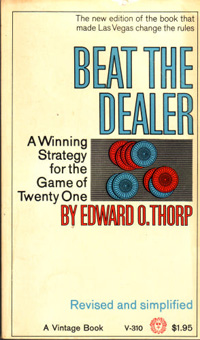 A great investor and writer even outside of blackjack

There was more than one version of Thorp's "Beat the Dealer" book. In 1966, he decided to make a second edition to the game and added information about another card counting system known as the High-Low Count, invented by Julian Braun. In fact, this system was easier to learn and was more powerful against the house. Thorp also wrote a book called "Beat the Market" in 1967, which was related to the stock market and hedge funds based on derivatives. He was actually successful in finding a mathematical pattern in how the pricing fluctuated in the market. In fact, he earned a 15% percent return on investment for a period of 19 years! This wasn't even blackjack either. In 1999, he claimed that his investments were actually yielding a 20% annual return for nearly 30 years, which is one heck of a major percentage.

Professor Edward Thorp also wrote for the Gambling Times, which was a magazine for gamblers and casino players. Some of these articles were used in another book called "The Mathematics of Gambling" authored by Lyle Stuart some time in 1984. Later on, Ed founded a company called "Edward O. Thorp Associates" in the city of Newport Beach, California for is other investing activities in the stock market and hedge funds where he and his wife named Vivian resides.